SARE FOR SENATE, July 13, 2022--Today was the first for the Sare for Senate sound van to hit NYC! A volunteer had suggested Diane have a roving digital advertising truck get out messages on her campaign throughout different areas. After some thought and planning the idea to have several vans with sound systems and banners advertising Diane's campaign throughout the borough neighborhoods where 2-3 people could jump out and get out literature, talk to people, get contacts, raise contributions, all while the driver briefed people on the speaker, was hatched.

The sound van covered neighborhoods along Broadway, going through Washington Heights where we also circulated Spanish leaflets and down towards Columbia Presbyterian Hospital, through Harlem by 125th Street (where the Sare campaign had collected thousands of signatures to get Diane on the ballot) past Symphony Space by 95th Street all the way down to the Upper West Side by 72nd Street.

The Sare for Senate sound van team distributed hundreds of leaflets and New Federalist newspapers and also collected contact information from people interested in working with the campaign. Spanish speakers appreciated that we had Spanish literature and several left their contact information. An nurse by the hospital took a few extra papers to leave in the lunch room for others to read. An older man fighting cancer and on his way to get chemotherapy was happy to hear Diane was challenging Schumer and also left his contact information.

The sound van was very effective in briefing people on the campaign while driving very slowly so that people could turn and see Diane's banners and signs. The banner had a prominent photo of Diane with SARE for US SENATE, Nuclear Power, YES!, Nuclear War, NO! and a smaller picture of Schumer with his face X'ed out. The signs at either door read DUMP SCHUMER! Dump Wall St. and War with a cartoon of Schumer as a woodchuck. Many people either smiled or displayed noticeable disagreement. Other people were seen recording the briefing on their phones or taking pictures. one woman who stood out from the rest when as she crossed the street towards us she wanted to listen in to the briefing. One woman signed up and wants to join our regular volunteers Zoom meeting. She's a teacher in the private sector. More roving van deployments will be planned for the other boroughs as well. 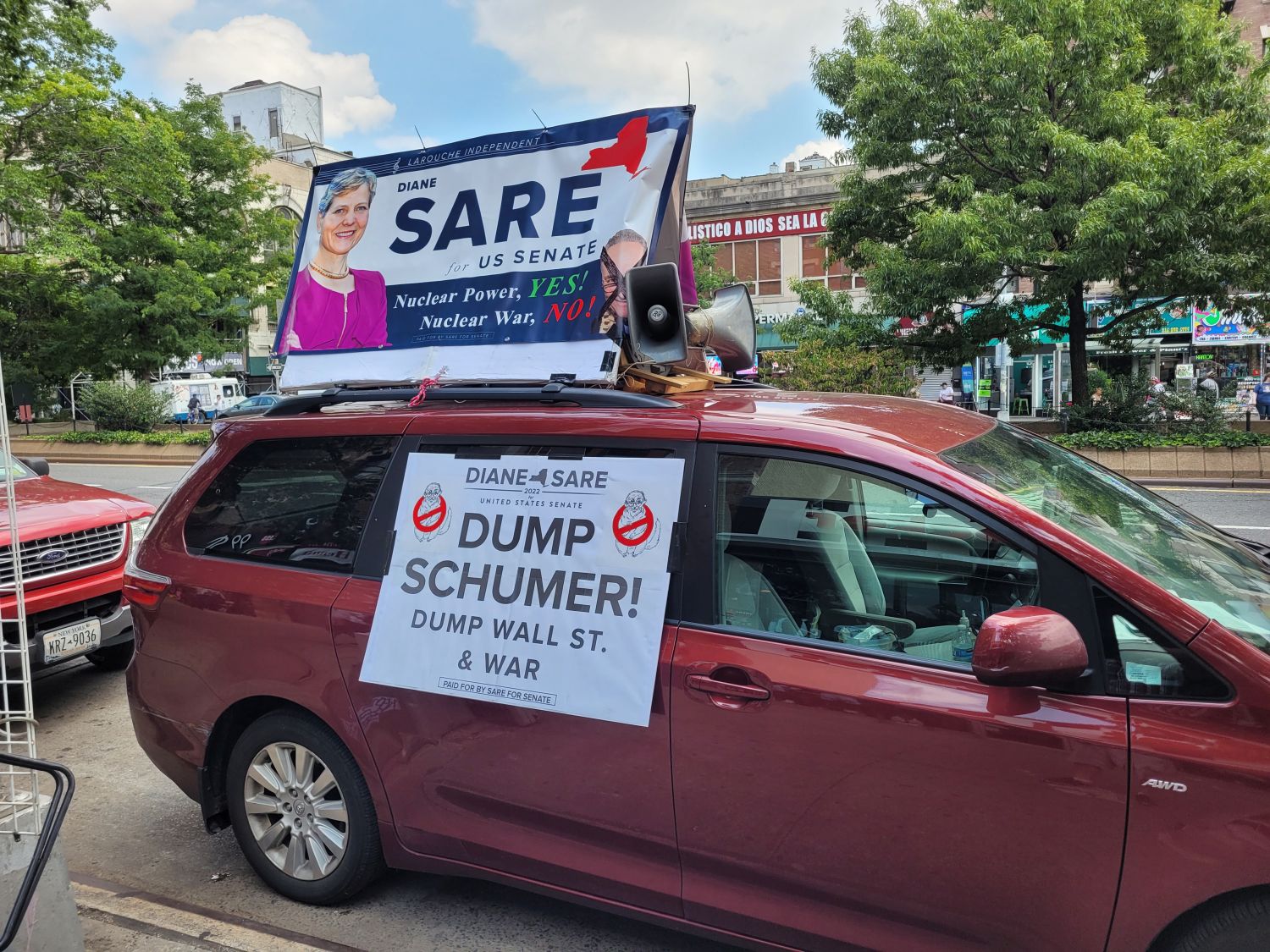