Are you going to tacitly dip the ladle into that morass of brown slime and fill your glass, as so many of your friends and neighbors have been doing? Having done that, will you drink it?

The answer to that question may determine whether the United States and the world can survive the coming two months without being plunged by the owners of the mad baboon into a thermonuclear war.

Would a “red wave” have solved that problem? Not necessarily, but it would have been a natural display of the mood of the American people, who are extremely unhappy about the direction that the Biden Administration is taking this nation. Georgia Congresswoman Marjorie Taylor Greene went so far as to promise an end to funding the Ukrainian war against Russia with a Republican majority in the House and Senate. Who knows what will happen now?

In the State of New York, the Republican Party seems to be in on the game, with Republican gubernatorial candidate Lee Zeldin quickly conceding the race to the little-liked incumbent Governor Kathy Hochul. Was there a deal cut to allow a few Republican Congressional seats in return?

My Republican opponent Joe Pinion, when challenged at a Buffalo meeting about my exclusion from his televised debate with Chuck Schumer said, “I don’t make the crooked ‘Deep State’ rules, I just abide by them.” Indeed.

When I announced my candidacy against Senate Majority Leader Chuck Schumer two years ago, I stated that the reason I was qualified to run against such a powerful and amoral thug, who made good on his “six ways from Sunday” threat to former President Donald Trump, is because for 33 years of my life, I had been an associate of the late Lyndon LaRouche.

Shortly after the 400-person FBI -run raid on his home in Virginia, when he was on trial in Boston on fraudulent charges brought by the infamous Robert Mueller, I met Lyndon LaRouche at a conference in Massachusetts, where he described the policies of the International Monetary Fund and World Bank as “evil.” That shocked me. I had never heard a political leader use such language, but when his and other presentations painted the somber picture of the mass death caused deliberately in poor nations by these institutions, I realized that he was right. I felt that I was obligated, as a U.S. citizen, to assume responsibility for the complicity of my own government in the carnage, and so our association began.

I had my first experience in observing election fraud in New Hampshire in the 1988 Democratic presidential primary election, where in spite of having over 5,000 paid subscribers to his publications, LaRouche was only credited with a few hundred votes or less. A campaign staffer had her finger broken by a Manchester election worker when she tried to get “too close” to watch the votes being counted.

So, although I was polling over 5% in the polls that dared mention my name, I wouldn’t have been surprised to be given below 1% of the vote. What happened was actually astounding, and can be attributed either to the bottomless incompetence of individuals at various boards of elections, including emphatically at Albany, and/or the desire to send a message to me and the likely quarter million New Yorkers who voted for me by cutting my already suspiciously low 1% of the vote from 55,000 on the night of the election, as reported by the New York Times, Fox News, and other media, down to 0.4% with less than 26,000 votes, reported by the same media on Friday! Every time a new figure was posted, supposedly representing more votes having been counted, my total dropped by a couple thousand votes. (see images) 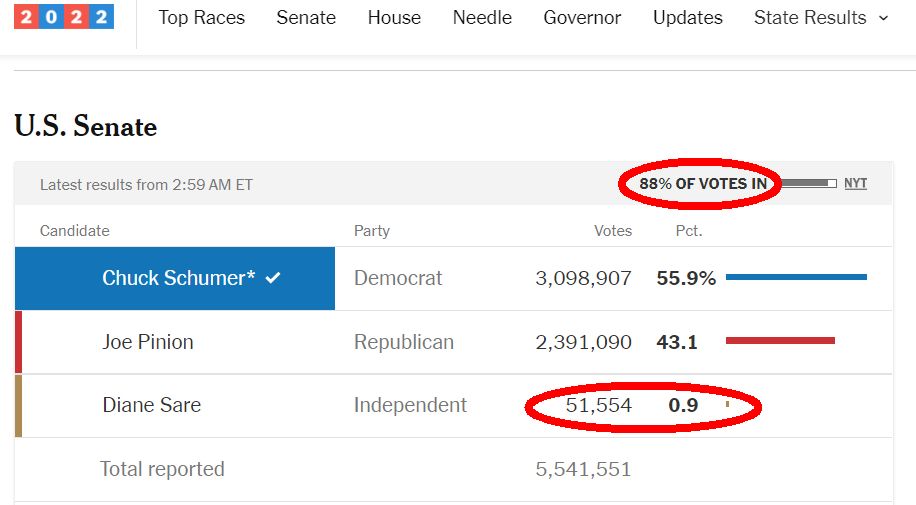 Furthermore, on election night, in Rockland County I had 5.8% of the vote, and over 6,000 votes. By the next morning this had been reduced to 0.2% of the vote, and about 200 votes. Similar unexplained losses occurred in dozens of counties.

“Why,” you might ask, “is this so important? You wouldn’t have won the election anyway.” Perhaps you should ask that of the Board of Elections and their intelligence agency and Wall Street bosses. The reason it’s important is that the election is not about me, it is about you. It is about millions of Americans going to the polls and casting their vote as a fundamental part of their participation in our allegedly “representative” form of government. Why should your Congressman be responsive to your interests, if he or she has an iron-clad guarantee that they will be right back in office regardless?

But it’s worse. Because Lyndon LaRouche was prevented from becoming President of the United States, our economy is in a free fall and we are on the brink of thermonuclear war with either Russia, or China, or both. Because Joe Biden became president in 2021, Ukrainian Nazis have received billions of dollars worth of weapons to wage war against Russia, even to the death of the last Ukrainian.

Although Hillary Clinton was revealed by her own emails to be stealing the 2016 Democratic Party nomination from the compliant Bernie Sanders, she was heard screeching the loudest about never-substantiated “Russian collusion” when Donald Trump won the 2016 presidential race. When thousands of Americans signed affidavits attesting to first-hand knowledge of election fraud in the November 2020 general election, most courts refused to hear the evidence and individuals who spoke up about what they had seen were banned from social media platforms. If they were anywhere near the Capitol building on January 6, their bank accounts may have been frozen, or they are sitting in solitary confinement in D.C. jails. Whether you “like” Donald Trump or not, you should consider the glaring double standard, and ask yourself whether you wish to live in a nation which jails the opposition.

So, cowardly people, who don’t want to consider the magnitude of the fraud, try to explain the lack of a “red wave” by the poor campaign of the Republican Party, and the fear of losing “abortion rights.” The truth is that both parties ran stupid campaigns, and shied away from real issues, like how to avoid nuclear war, and what to do about hyperinflation. But from everything I observed on the streets, the Democrats should have taken heavy losses which didn't materialize. Ultimately, with a few exceptions, both parties made a deal in the interest of their billionaire sponsors to allow only a certain election outcome, and that deal may get us all killed.

The lame duck session is particularly dangerous because desperate warmongers may fear losing momentum with a potentially slim Republican majority in the House. Russia is warning that the UK and the Ukrainians are planning to detonate a “dirty” (radioactive) bomb in Ukraine, and blame it on the Russians, in order to justify a military response from the U.S. and NATO.

We must demand the truth! I intend to get to the bottom of what happened, and even to declare my candidacy as an independent in the next election cycle. Don’t drink from that glass!