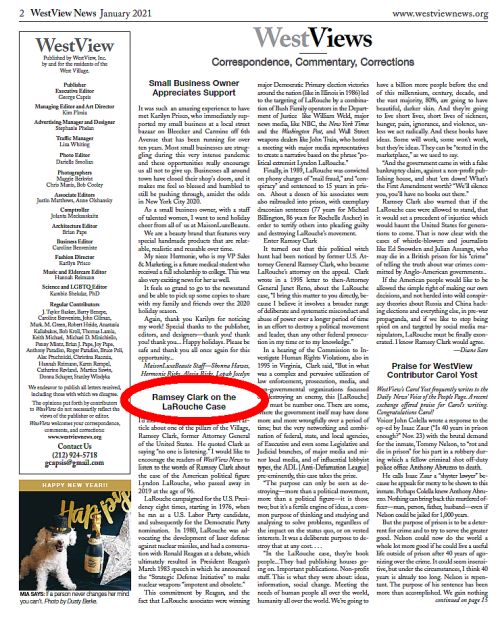 Ramsey Clark on the LaRouche Case

I’d like to thank Bruce Poli for his short article about one of the pillars of the Village, Ramsey Clark, former Attorney General of the United States. He quoted Clark as saying “no one is listening.” I would like to encourage the readers of WestView News to listen to the words of Ramsey Clark about the case of the American political figure Lyndon LaRouche, who passed away in 2019 at the age of 96.

LaRouche campaigned for the U.S. Presidency eight times, starting in 1976, when he ran as a U.S. Labor Party candidate, and subsequently for the Democratic Party nomination. In 1980, LaRouche was advocating the development of laser defense against nuclear missiles, and had a conversation with Ronald Reagan at a debate, which ultimately resulted in President Reagan’s March 1983 speech in which he announced the “Strategic Defense Initiative” to make nuclear weapons “impotent and obsolete.”

This commitment by Reagan, and the fact that LaRouche associates were winning major Democratic Primary election victories around the nation (like in Illinois in 1986) led to the targeting of LaRouche by a combination of Bush Family operators in the Department of Justice like William Weld, major news media, like NBC, the New York Times and the Washington Post, and Wall Street weapons dealers like John Train, who hosted a meeting with major media representatives to create a narrative based on the phrase “political extremist Lyndon LaRouche.”

Finally, in 1989, LaRouche was convicted on phony charges of “mail fraud,” and “conspiracy” and sentenced to 15 years in prison. About a dozen of his associates were also railroaded into prison, with exemplary draconian sentences (77 years for Michael Billington, 86 years for Rochelle Ascher) in order to terrify others into pleading guilty and destroying LaRouche’s movement.

It turned out that this political witch hunt had been noticed by former U.S. Attorney General Ramsey Clark, who became LaRouche’s attorney on the appeal. Clark wrote in a 1995 letter to then-Attorney General Janet Reno, about the LaRouche case, “I bring this matter to you directly, because I believe it involves a broader range of deliberate and systematic misconduct and abuse of power over a longer period of time in an effort to destroy a political movement and leader, than any other federal prosecution in my time or to my knowledge.”

In a hearing of the Commission to Investigate Human Rights Violations, also in 1995 in Virginia, Clark said, “But in what was a complex and pervasive utilization of law enforcement, prosecution, media, and non-governmental organizations focused on destroying an enemy, this [LaRouche] case must be number one. There are some, where the government itself may have done more and more wrongfully over a period of time; but the very networking and combination of federal, state, and local agencies, of Executive and even some Legislative and Judicial branches, of major media and minor local media, and of influential lobbyist types, the ADL [Anti-Defamation League] pre-eminently, this case takes the prize.

“The purpose can only be seen as destroying—more than a political movement, more than a political figure—it is those two; but it’s a fertile engine of ideas, a common purpose of thinking and studying and analyzing to solve problems, regardless of the impact on the status quo, or on vested interests. It was a deliberate purpose to destroy that at any cost. . . .

“In the LaRouche case, they’re book people...They had publishing houses going on. Important publications. Non-profit stuff. This is what they were about: ideas, information, social change. Meeting the needs of human people all over the world, humanity all over the world. We’re going to have a billion more people before the end of this millennium, century, decade, and the vast majority, 80%, are going to have beautiful, darker skin. And they’re going to live short lives, short lives of sickness, hunger, pain, ignorance, and violence, unless we act radically. And these books have ideas. Some will work, some won’t work, but they’re ideas. They can be 'tested in the marketplace,' as we used to say.

“And the government came in with a false bankruptcy claim, against a non-profit publishing house, and shut ’em down! What’s the First Amendment worth? 'We’ll silence you, you’ll have no books out there.'

Ramsey Clark also warned that if the LaRouche case were allowed to stand, that it would set a precedent of injustice which would haunt the United States for generations to come. That is now clear with the cases of whistle-blowers and journalists like Ed Snowden and Julian Assange, who may die in a British prison for his “crime” of telling the truth about war crimes committed by Anglo-American governments.

If the American people would like to be allowed the simple right of making our own decisions, and not herded into wild conspiracy theories about Russia and China hacking elections and everything else, in pre-war propaganda, and if we like to stop being spied on and targeted by social media manipulators, LaRouche must be finally exonerated. I know Ramsey Clark would agree.